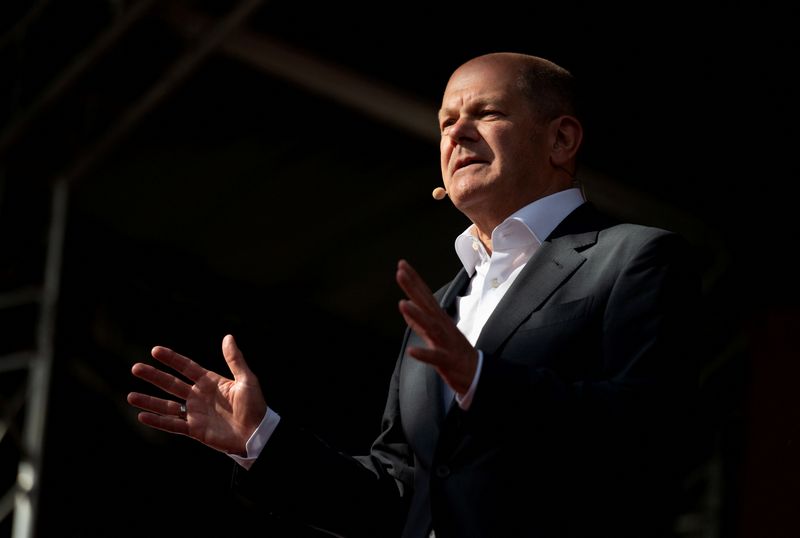 BERLIN (Reuters) -Germans went to the polls in Germany’s most populous state on Sunday in a vote that poses an early test for Chancellor Olaf Scholz’s Social Democrats five months after he took office with a domestic policy focus that was quickly eclipsed by the Ukraine conflict.

The centre-left Social Democrats (SPD) have dominated North Rhine-Westphalia (NRW) — home to more than a fifth of Germany’s population and to the rust-belt Ruhr region — for most of the past half century.

But the party lost to former Chancellor Angela Merkel’s conservatives (CDU) in its worst state election in 2017, under attack for its failure to tackle traffic jams and a rising crime rate. A few months later, it also suffered a record defeat at the federal level.

Ahead of Sunday’s vote, the two parties were very close in the polls, with the CDU having a slight lead at 32% versus 28% for the SPD in a survey published by INSA on Thursday.

“An election victory would radiate, in a positive sense, into discussions about the SPD’s strength in the federal government and Olaf Scholz’s popularity,” Siegel said

The NRW election is also seen giving a boost to Germany’s environmentalist Greens party, which could become kingmaker.

The CDU has governed the state in a coalition with business friendly FDP since 2017. But even with its slight lead over the SPD, it might not be able to secure a majority with just the FDP, which stood at 8% in the polls.

The Greens most recently polled around 16%, which means either party is likely to need the Greens to form a state government.

Last week, the CDU won by a landslide in the considerably smaller northern state of Schleswig-Holstein, but in NRW it will have a much harder time securing votes.

Local issues such as affordable rents and public transport are usually what determines voters’ decisions in state elections.

Siegel said there was no dominant topic determining voters’ behaviour across parties. In 2017, the CDU won the vote by focusing its campaign on traffic jams, rising crime and an underperforming education system.

Manfred Guellner, head of pollster Forsa, told Reuters that job security and the impact of structural change from the dismantling of the coal-fired power plants were important issues on voters’ minds.

The CDU’s win in Schleswig-Holstein was seen partly driven by the popularity of state premier Daniel Guenther. In NRW, its candidate Hendrik Wuest only just took office in October and has not had time to build a following.

After casting his vote in a polling station in Rhede, a cheerful-looking Wuest said the good weather made it a great day to vote, asking his state’s citizens to take part in the ballot.

Wuest is running against Thomas Kutschaty, the SPD candidate, who served as a minister of justice in the state from 2010 until 2017.

Kutschaty voted in Essen in a classroom where he started school in 1974.

“That was a moving moment for me right now,” Kutschaty told reporters.

The fact that the state is the home turf of CDU leader Friedrich Merz is also not expected to help the party win the election. A Forsa survey published on Wednesday showed that only 13% of Germans believe that Merz would be a better candidate for chancellor than Scholz.

“To put it bluntly, Merz does not help at all, on the contrary,” Forsa’s Guellner said.